Gorging store is NOW 20% OFF, including DVD, Blu-Ray and official movie poster items. Use the code – ADVENTURE – at purchase. Get Gorging today! 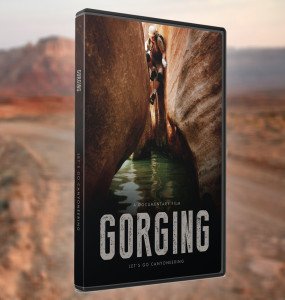 Get ready for the REI screening blitz. If you’re interested in seeing Gorging at your local REI, let us know! All screenings are free. More details on the events page here. 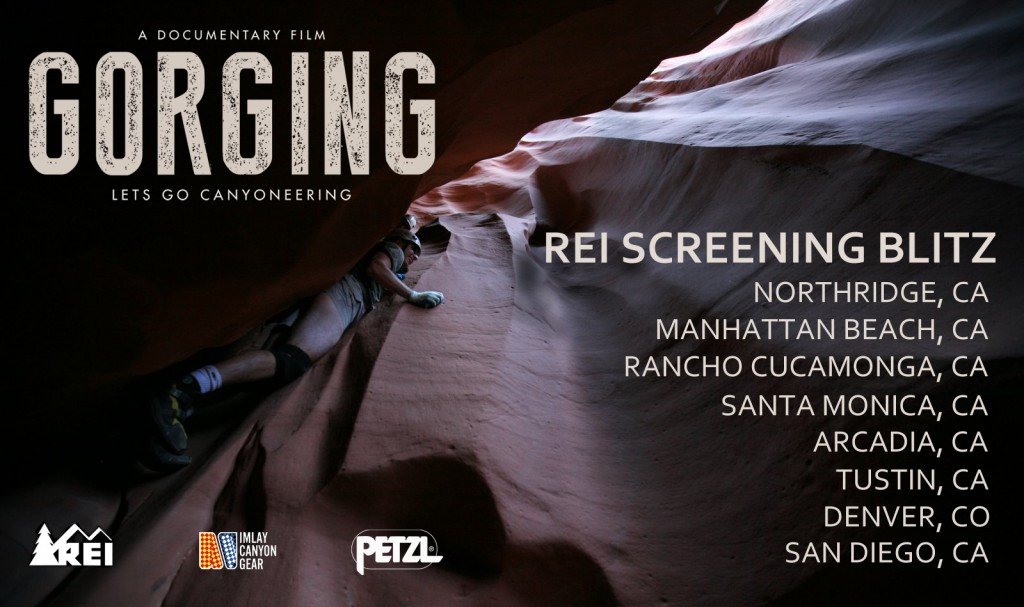 Gorging is returning to LA for a FREE one-night-event, happening at Adventure 16 outdoor gear store in West LA. The screening is scheduled for Friday, September 5th. Filmmakers will be in attendance – and a Q&A with raffle with follow the screening.

Eaton Canyon, a classic canyoneering adventure located just north of downtown Los Angeles, will soon be closed to the public. The decision was made by the National Forest in reaction to countless injuries and deaths occurring at the final lower waterfalls. Although nearly all of the accidents occurred by non-canyoneers, hikers who are ascending a sketchy use-trail, the closure also effects canyoneers descending from the upper canyon.

If you’re interested to find out more about the closure, please check out the Coalition of American Canyoneers – here. 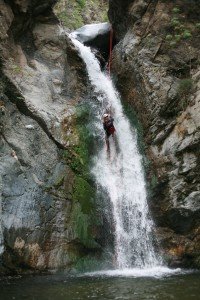 A GRIPPING TOUR INTO THE UNKNOWN, GORGING – A DOCUMENTARY FILM ABOUT THE SPORT OF CANYONEERING – IS NOW FULLY AVAILABLE

Los Angeles, CA – GORGING is now available for digital download at www.GORGINGmovie.com. Exploring the wildly-unique recreational sport of canyoneering (as featured in the film ‘127 Hours’) GORGING follows Steve Cabourne, an enthusiastic weekend warrior from Los Angeles, as he advances his skills and embarks on exceedingly dangerous canyon adventures.

Canyoneering is the sport of exploring canyons by means of hiking, swimming, climbing and rappelling. Relatively unknown, the sport was ripped from obscurity when news broke of a grisly accident involving Aron Ralston, who severed his arm while trapped in a canyon. Experiencing an overnight spike in popularity, with participants of all skill levels, the sport witnessed a relentless increase in accidents and deaths.

Gorging features a rich cast of characters and canyoneering gurus, including Rich Carlson, a professional canyoneering guide and instructor who is considered to be the ‘Father of American Technical Canyoneering.’ Michael Kelsey is the eccentric and aging Guidebook Author whose controversial books introduce once-secret canyons to the general hiking public. Dennis Turville – the ‘Pioneer’ – was among the first to make technical descents into canyons 30 years ago. Today Dennis stands sentinel as he watches his favorite canyons become inundated by the masses.

“Despite finding myself in life-threatening situations along the way, producing GORGING has been an extremely satisfying endeavor. The icing on the cake will be to finally get the film out there for digital download,” says action-sports commercial and network television director, Brian Olliver, Founder of DFS Films and Director of GORGING. “Until now, attending screenings and buying DVDs have been the only way to view the film, but now a high quality version, featuring the most wildly beautiful canyon terrain in pristine HD, is available instantly.”

Olliver is based in Los Angeles and is best known for producing documentary-style sports content on Fox Sports – including the series “Firsthand” and “Environmentally Challenged”.

About the Filmmakers // Director & Producer
Graduating from New York University, Brian Olliver made a beeline for Utah’s snow-capped Mountains. After an immensely satisfying year immersed in the ski bum-lifestyle, he reluctantly went to work as a freelance filmmaker directing and producing action sports videos. In 2004, Olliver was tapped to join Fuel TV (Fox Network Group) where he continued to produce action sport content for television while overseeing production on the network’s signature series, “Firsthand”. Olliver eventually began taking on short-form projects, including producing and directing commercial spots. While working with clients like Pepsi and Toyota, he continued to blend the sensibilities of core action sports with mainstream appeal.
GORGING is Brian Olliver’s first feature-length film.

More Gorging screenings on the horizon. Just go to our screenings page here on the website to find out more. 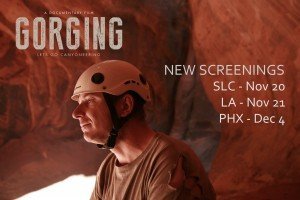 Fun insight from the artist behind the Gorging movie poster – here. 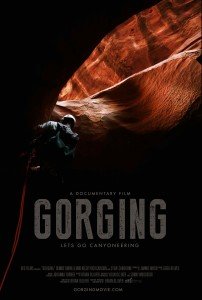 The full album is available for purchase and download on i-tunes, and also here! 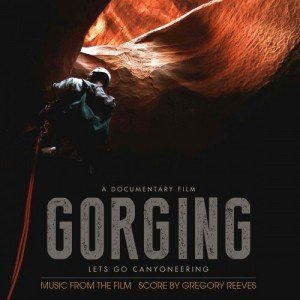 An exceptionally memorable screening at the Big Bear International Film Festival… Gorging received ‘Best Documentary’ and ‘Audience Award: Big Bear Connection.’ Thrilled and honored to have been included in the festival, and to have received these important awards.