Just 2 weeks before our scheduled World Premiere, set to play in Salt Lake City on June 27th, we received an unexpected email – ‘Gorging’ had made the official selection at the San Antonio Film Festival. Great news no doubt, but SLC had suddenly lost its ‘World Premiere’ status.

After a few tweaks in photoshop, altering our promotional materials to read ‘Utah Premiere,’ Gorging was prepared for its first public screenings.

Both San Antonio and SLC were phenomenal successes. With the film selected to play in San Antonio, an area with few canyons around, the festival was an opportunity to introduce the film to a non-canyoneering audience. Our audience was pleased and entertained, and an immersive Q&A followed the screening.

Only a week later the Gorging team traveled to SLC to prepare for the Utah screening. The event had sold out a few days earlier and more folks showed up at the door hoping for cancelled tickets. We had originally intended for the Salt Lake screening to be the film’s kick off, and in attendance were the cast and crew behind the film -including Mike Kelsey, Dennis Turville and Steve Cabourne – our Gorging heroes. 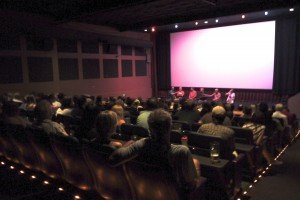 Unlike our San Antonio showing, our Salt Lake audience was primed for the screening. Most from the audience were participants of the sport, and some are active in the sport’s community. This is the group I hope will best connect with the film.

Any anxiety I had going into the Salt Lake screening was diminished by the time the film’s end-credits rolled. Much applause – and plenty of encouraging words followed the screening. The Q&A afterwards was wild. Taking advantage of having face to face access with the Gorging heroes, the audience brought great, interrogating questions. Dennis kept things lively while commenting on the use of internet forums while talking about canyon adventures – ‘no one wants to know what you ate for breakfast, and no one cares about how many canyons you did last summer.’

With the success of two great screenings, we’re excited about bringing Gorging to new audiences. Hope you will find us at the next screening.